Thoughtforms | The materialization of sustained ideas

Thoughts that are clothed with intense emotion are exponentially powerful.

Thoughts that are clear, distinct, strong and sustained by focus and concentration take on a life of their own.

Thoughts which are systematically sustained by groups of people over a period of time come to life as thoughtforms in the collective consciousness of the group.

…Had strong ideas about the desired outcome you envisioned for a story you wanted to write, a special event you planned to convene, a canvas on which you were painting, or a room you were renovating? You held the concept, the strong vision, the idea firmly in the forefront of your mind. You constantly brought the idea up in your mind’s eye and methodically fleshed it out until it was objectified, externalized, and finally physically manifested.

…Sat in a room for a time that was filled with likeminded people whose thoughts were collectively trained on one goal, and felt the palpable group intent? The group created and shared an energetic field, a collective thoughtform.

These are examples of the deliberate, human creation of a thoughtform. The shape of our empowered self, our objectified animated existential fear(s), the shadow material sequestered in the basement of our subconscious, our addictions, our inner child-selves, are all examples of thoughtforms.

A sustained thoughtform, healthy or unhealthy, which is invisible to third dimensional (3-D) “conventional,” ocular vision, lives as an energetic form in our biofield. That is, as long as we give it our sustained attention. Human-originated thoughtforms are dependent on the people who generate them. They can be creative, uplifting and growth producing or parasitic and energy sapping.

Thoughtforms in human biofields are visible to sensitives and intuitives who are simultaneously aware of both dense and subtle bandwidths of reality. EVERYONE creates, can deliberately sustain, and summon thoughtforms with their creative inner vision.

Consider: With what exactly are people interacting when they?…. 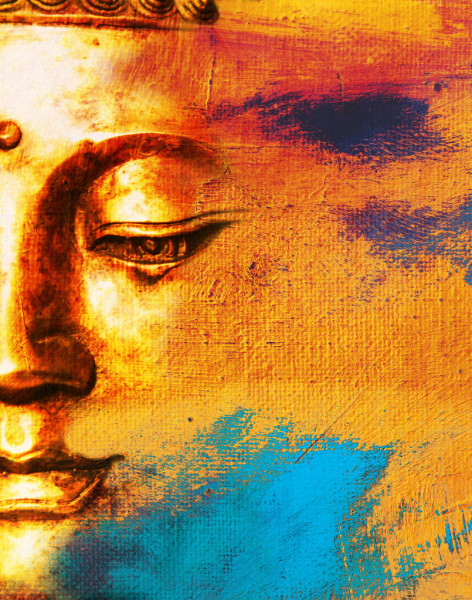 Every supplicant on the list above is invoking a thoughtform.

However, not all thoughtforms are created equal!

Some are generated primarily by consistent repetitive individual, human thought and emotional patterns.

Some are versions of ourselves experienced at various frequencies of our multidimensionality.

Some are generated by the collective unconscious into which we tap, and are recognized as universally shared archetypes. These thoughtforms are the grist of myths, folklore, and legends that are strikingly similar across cultures spanning the globe for eons.

Some thoughtforms are believed to exist independently of the individual or the collective unconscious. They are non-corporeal energy streams of various levels of attainment which evolve by facilitating the evolution of humanity or the Earth. These data/energy streams evolve by simultaneously assisting and learning from the experience of people in physical embodiment.

It is my experience we come into embodiment with a lesson set, a pre-birth covenant to work through, and at that time non-corporeal presences who will be with us over the course of a lifetime are those who have a similar or complementary path of evolution. They don’t want or need to take physical embodiment but can assist us in staying on the path to successfully working through our lesson-set.

We may be completely oblivious to them over the course of an entire lifetime. We may get subtle inklings, or be occasionally aware of their presence. Or we may actively engage with them on a consistent, collaborative basis as fellow travelers on the path who have a vantage point on reality that compliments ours.

The strength and nature of a thoughtform in our lives is contingent upon:

The larger consciousness frame, spirit, the unified field, may use any or all of these thoughtforms as interfaces with humans to assist in our evolution.

The thoughtforms noted below are conduits through which source energy, the undifferentiated field, can interface with humankind and assist with our evolution.

We encounter and interact with the thoughtforms that follow below when we are either in very low cycling brain wave states which are deeply relaxed, meditative, or dreamscapes (Alpha and on the cusp of Alpha and Theta, circa 4hz), or in very high, exalted states of transcendent bliss (Gamma). In both of these states, the analytical mind is still and silent.

We can operate very much like radio receiver-transmitters. All frequency bands carry information. When we turn the dial up or down on our radio, the receiver tunes into different music and information on stations at each bandwidth. Similarly, if we want to expand our awareness and collaborate with thoughtforms beyond the 5-sense conventional world, we must raise our own frequency, turn up the dial on the “radio of self,” to match the information that awaits us at higher bandwidths.

There are myriad tried and true paths by which we can “tune in.”

When we learn to consistently take our attention away from the “particle world” of matter and focus on the “wave world” of frequency and vibration, we become aware of a broader range of frequencies that offer access to dimensions beyond the world of form.

The thoughtforms noted below facilitate human evolution toward wholeness when summoned by our free will. Please note that “summon” here transcends the material universe notion of making a verbal invocation. We may also summon these thoughtforms through deep desire or intense focus and concentration.

Ancestral guides are those who were physically related to us in this lifetime. Since every thought that has been thought and every life that has been lived in the multiverse is recorded in Akasha (i.e.the quantum field) we (or intuitives) can summon ancestral guides from the records.

Our ancestors and loved ones may have long since re-embodied. Yet, from my experience, the unified quantum field, Akasha, will often call up the archived data stream of the ancestor from the records as an interface for someone in current embodiment if their interaction is likely to promote growth and evolution. 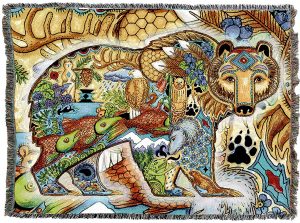 Totem Animal: Protector who symbolizes and exhibits qualities we’ll need to summon from within ourselves at some point.

Shadow Totem: Has symbolic resonance with aspects of ourselves that we have denied or rejected and which remain disowned and unresolved in the subconscious or unconscious mind. 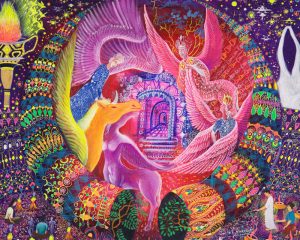 Archetypal guides reactivate identities that we would recognize, have symbolic meaning to us, or exemplify universally recognized behavior patterns and qualities. They resonate with the intention of our life lesson-set as well as those classically related to the workings of the human psyche and are available as teachers. As we learn and grow, different guides may come on stream.

Ascended Masters, Saints, Bodhisattvas and Angelic Guides are energy streams/presences magnetized to those whose pre-birth covenant revolves around reaching and/or working with higher spiritual planes. These presences are of very high frequency reality frames and often help groups of people with collective spiritual aspirations.

There are many thoughtforms in this category who have been invoked: 1) so frequently, 2) so consistently, 3) by so many millions/billions of people, 4) for so many eons upon eons that individuals or groups of people collectively and repeatedly witness what are known as “apparitions.” It is said that these thoughtforms are so accessible through the power and momentum of invocation that they “step through the veil” and can be witnessed in 3-D.

Mary, thought to be the mother of the historical Jesus of Nazareth, is the most universally known example in the west, witnessed all over the world for centuries. In the east, Kuan Yin (Chinese), the female manifestation of the bodhisattva of infinite mercy, Avalokitashvara, known as Tara and Chenrezig to Tibetans, and as Kannon to the Japanese is also witnessed by intuitives and is extremely accessible.

This accessibility is especially prevalent when the same thoughtforms/guides are included in the sacred texts of multiple faith and spiritual traditions such as the Archangels Michael, Raphael and Gabriel who all appear across Christian, Jewish, and Muslim texts.

Thoughtforms that manifest as non-corporeal guides appear, or reveal themselves to our inner vision in forms that we can most easily recognize and offer information in ways that we can best metabolize for our evolution. It is through the interface of thoughtforms at various frequencies that the larger consciousness frame, source energy, often communicates with us.

The Mahatma Letters to A.P. Sinnett, published by Trevor Barker

Tulpa is a concept in mysticism and the paranormal of a being or object which is created through spiritual or mental powers. It was adapted by 20th-century theosophists from Tibetan sprul-pa (Tibetan: སྤྲུལ་པ་, Wylie: sprulpa) which means “emanation” or “manifestation”.

If people see you are being a hypocrite due to saying one thing and doing another, your words will likely have the opposite effect. Think about how often there has been a well-known spiritual teacher or guru who has said something that sounds quite profound and insightful, yet then goes off and does something contradictory.

A long time ago, a wise man decided to write a book. His name was Lao Tzu, and the book was called the Tao Te Ching.
Not only one of the world’s oldest pieces of literature, it’s also one of the most profound and potentially life-changing.